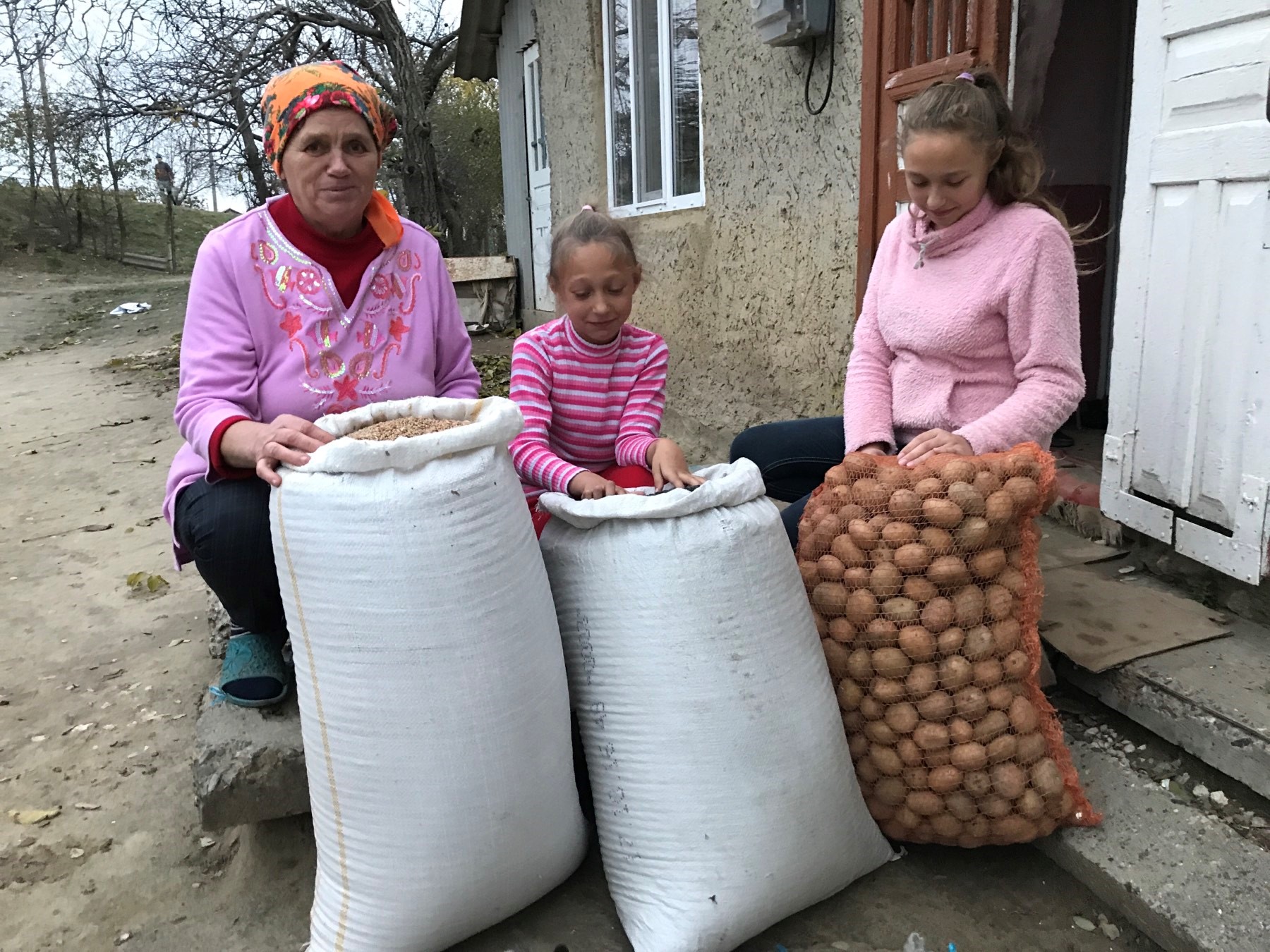 We support the village of Dancu who have established a charity called Tabita.  This helps the farmers of the surrounding village with seed, fertilisers and advice about farming and asks as a collective when the harvest is ready.  We asked Slavic, who heads up Tabita, to share just one of the many stories of the many people that have been helped by Tabita and through the support of Link to Hope and Breadline another UK charity.

“Ecaterina is 62 yrs,  a widow who lives with her youngest daughter Sfetlana 32 yrs and three of her grandchildren.  Ecaterina lost her husband Leonid years ago when he died of cancer. He left her with 5 young children. Since the death of her husband life has been terribly tough for Ecaterina and she has faced much despair as she struggled in poverty to bring up her children on her own.

When Tabita first came along side her in 2009 we could see she was deeply depressed with no hope at all for her future. Her house was in such bad condition it was nearly falling down. It was so unsafe, cold and damp, that she feared that she would soon become homeless.

She was also desperately worried about her oldest daughter who had gone abroad to find work many years before but never returned. This caused a great pain for Ecaterina especially because she had no idea what had become of her daughter.  Then her son married and soon after he discovered he had cancer and his wife left him. Praise the Lord, we helped him towards a special treatment but more important we prayed and he is alive today working in Chisinau. We all believe that God did a miracle with him. Ecaterina’s remaining daughter Sfetlana also married, then one day her husband went to Russia to find work and after a while told her he was never returning. The burden of all these tragedies in her life and just trying to survive on so little became too great for Ecaterina and she reached a time in her life that she thought it was better to die than continue to live with so much suffering.

But we thank God, because the church and Tabita found out about her situation and began to help repair her house, provide clothes for the children, firewood, emergency food parcels, medical support etc.  But one of the most important things we were able to do through Tabita and its agricultural support, was to help her make her plot of land productive again. Because she was so poor her land had become fallow because she could not afford to buy seeds and other things she needed to grow the crops like maize and sunflower to feed her family and keep livestock. But since Tabita began helping her to work her land she is now able to raise chickens, geese and ducks which is such a great blessing for her family. Now they have food which they grow and in a good harvest year can look after themselves.

We continue to visit her regularly and every time we see her she is so encouraged and grateful for the help that she and her family have received. She often says to us “I thank God so much that I know have a safe and warm place to live and when I see my chickens, ducks and other animals it gives me such joy and peace.” We have also been encouraged by the changes we have seen in her. She is so much happier now because she knows that there are people in this world who really care for her and her family and that she is no longer alone.

Since our Tabita Christian Agricultural Association was formed in 2001 we have helped hundreds of poor farming families like Ecaterinas to make their land more productive again and have a more sustainable livelihood.

A few years ago when I was in the UK someone asked me if the work of the Tabita had made people in the community wealthier? I replied “No not wealthier but safer!” Today with our help and the wonderful support we receive, hundreds of families are now safer because they have food to eat, livestock they can feed and use for food and above all the hope that life can change for the better. We give all the glory and thanks to God for this as He continues to provide many opportunities for us to take his love and gospel into the heart of the poor communities we serve”

The Tabita team are amazing and we are very blessed to partner with them and contribute resources and funds to help some of the projects that they run.