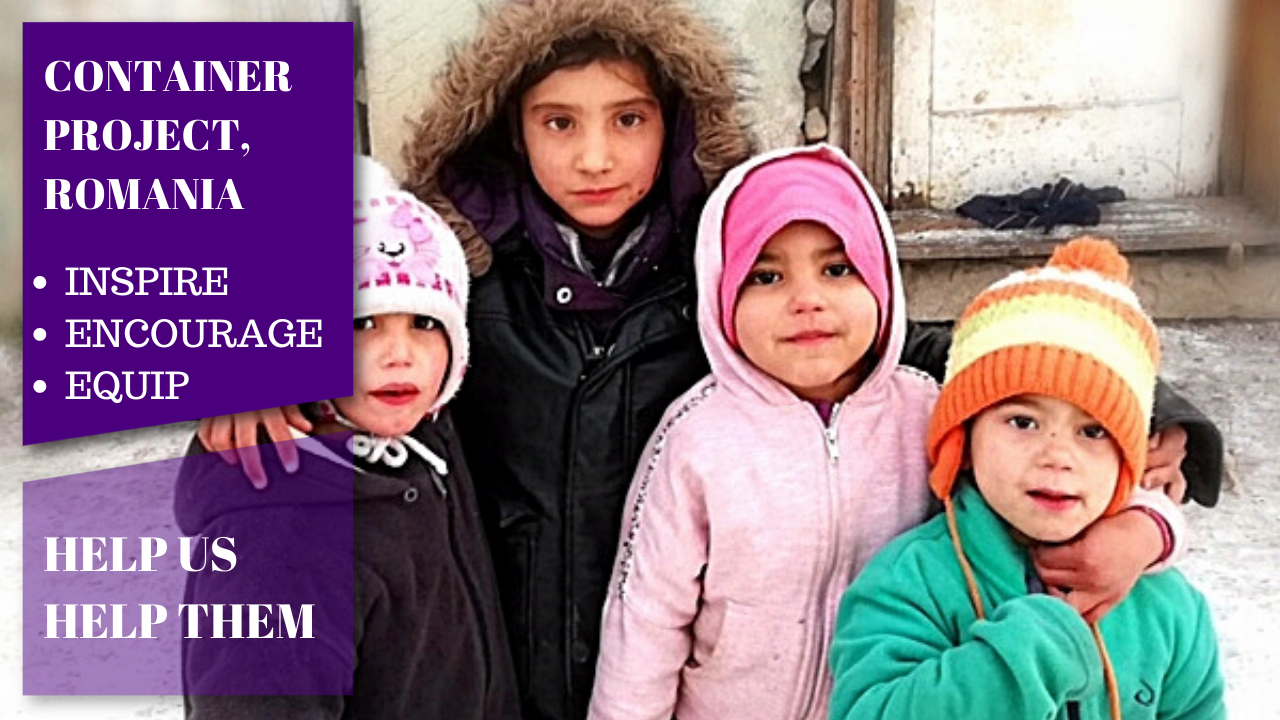 Many of you are aware of the families that were found last Christmas as Shoeboxes were being delivered.  A four month old baby called Star had just died of the cold as the Shoebox team arrived.  The shed they had been living in was freezing, dirty and dangerous.  Otto and his team organised the funeral and sorted out the police and ambulance and then appealed to Link to Hope for help.  You were amazing and two containers were bought for the families to move into.  It has been a long and hard year for Otto and his team fighting against prejudice from many people in authority who did not want to help him in placing the containers or supporting him in trying to help these families.  Eventually they were located and the next step was more permanent accommodation.  A house was found and before Christmas the families moved in.  Here is an update from Otto in his own words on what he found this year when he came to give them Shoeboxes in very different circumstances.

“I remember how was last year when I visited Vasile’s family, taking with me the shoeboxes, and I just find out that little Stela(Star) just passed away. That picture what I saw and that feeling remained printed on my heart and mind forever. I saw the other small children in that dark, dirty and cold room looking in my eyes, trembling because of the freezing weather I realized, that they need somebody, who will come alongside them and really God brought me and didn’t let me to just go away from them. So In this year, right on Christmas night I did a surprise visit to Vasile’s family in their new home. Was dark and cold outside, and I just walked up to the window, to see what they are doing. I saw the children around the small table Vasile, Anuta (mother) and grandma Margareta, eating the traditional Romanian food: cabbage rolls and mamaliga (made with corn flour). There was light and warmth inside. Outside the dogs were barking and I was praying, giving thanks to God’s for his mercy and love. My son was in the hospital with my wife and my daughter was away to my brother in law. I had many reasons to be sad and worried, but seeing and  watching this family, I had an indescribable joy and thankfulness in my heart. I went in, and that is the picture what I saw: peaceful family atmosphere, smiley children and parents.

All this changing and difference was possible because of God’s grace and because of your active, prompt and practical love, what you showed to this family. May our God bless you and just seeing this difference I can say that worth It!!!  God strengthen me and I was convinced, that I’m doing first of all for Him, and also for those precious children, who have the same value, as mine or any other children.

Through all this we have also become aware that around the house that has been bought, are many very poor families, who are also struggling. I have started to build relationship with them, telling them that we are neighbours and to be in good relationship with. I visited each of them and I brought food and gifts for them. I feel God is telling me, that through what has happened, that we bought that house right there,  because those families also need help and to feel loved. So we visited all of them with dads and children’s from my church giving out the shoeboxes that we received from you. Praise the Lord, that in this way, through Vasile situation we can be light and salt for those marginalized families. How amazing is God’s plan!”- Otto

This is the story of the Container Appeal to show just how amazing our supporters are and how so much can be achieved in a very short space of time when people pull together. Also that without your shoeboxes there would have been no opportunity to visit these families and therefore their lives would have continued with no hope…….

Urgent Appeal– Yesterday morning I was woken at 4am by WhatsApp Shoebox photos pinging through on my phone from Eastern Europe. When I finally (rather grumpily) looked at them over breakfast I was filled with horror as I read what had actually been sent to me. Please read it to the end as this will beyond doubt tell you how important your shoeboxes are to the people that receive them and how they enable Link to Hope to continue to help after that. This is from our contact Otto in Romania in his words.  Otto is our project manager in this location and it is his words that are in the speech marks

“This story is heart breaking story. I went to bring shoeboxes for 2 very poor gypsy families in Garcini (they are the poor of poorest) who live in an abandoned building next to the trash settlement and I found out that their 4 month baby just passed away because of inhuman conditions and because the house was very cold. She got a cold and because they don’t have wood and possibility to keep enough warm the room, Steluța (meaning Star) passed away 😢. The Ambulance and the police came and took the body for the autopsy. When I heard the next youngest child, Andrei (1 year and 5 month) was coughing, I took urgency with his mother. The doctor said, that his fever is 40 and have a very dangerous pneumonia.

Andrei is still at the hospital. So I realized, faced with this situation, that now is not the time to distribute the shoeboxes, is time to do more than that. It is time to come along side to this family and help and bring comfort in their grief. They didn’t have possibility to organise the funeral, they don’t belonged to any churches. So they didn’t have any help and support. So we organised the burial for Steluța. So I visited them to give shoeboxes and we ended up with a funeral and facing small beautiful children living in inhuman condition and rejected by others.
This is the reality, happening in our days. So after this, we started to mobilize other people and organisations to do something for this family. We are in process now to create minimal humane condition for those children (9 children) who are living there.
We are helping them to clean the house, we give them mattresses and bedding stuff, wood and food. So last week I was there almost every day helping them. Please pray for this family and for us to really find the best solution for these 2 families. One of the options is to buy 2 containers, fully equipped where they can live. We have very cold winters and a heated, insulated container would be a solution.

In all these hardship times, what brings joy is, that the other children all the time asked me about the shoeboxes. The waited to receive the shoeboxes. I tried to explain to them, that they will receive them, but now, they have to be patient. While we worked inside on the house taking out dirty clothes, cleaning and painting the walls, they still keep to asking: “But when we receive our shoeboxes”?
So, I want to prepare the house first, and after that to give the boxes, but yesterday evening I gave up. I gave them the shoeboxes. Their face and eyes were shinning, like a candle in that dark room. Joy and light in the darkness of poverty, in the darkness of suffering and grieving that brought the shoeboxes in this family life. Really, I was on my way distributing the shoeboxes, and I realise that we have to came alongside this family and they need more than shoeboxes. But God used these little boxes to bring a change in a families life (I can say that of many families lives in Eastern Europe) to save children’s life, to give a chance for those who are the least the last and the lost! That is wonderful! Please share this with the families who are preparing those boxes. Their efforts and love is not in vain!
God bless you too for all mission work and reimburse to you with heavenly treasure all your investment in His Kingdom!” Otto
So we asked for people to donate funds to help buy these two containers. WE HAD FANTASTIC NEWS. Nearly £6,000 has been raised to buy two containers for the two families,. Emergency funds were sent which meant that wood, food and clothing have been delivered to them. Andrei the 15 month old toddler who was taken to hospital with a fever has also been released from hospital. However until the families housing situation improves he is being looked after by a foster family.

So Otto’s team have taken action and moved the family out from their desperate accommodation. They have all been taken for showers and taken to eat in a restaurant for the first time ever. The children have also seen their first Christmas tree. They  stayed at a colleague of Otto’s while a temporary apartment was found for them. The children were very excited to be able to watch cartoons from a safe, warm bed. Otto has met with the Vice Mayor and Mayor of the village about land to put the containers on and is trying to get them fitted out as soon as possible so the families can move into them. Andrei will then come back and live with them.

So we waited to see what would happen and the next update came through soon after from Otto
” Yesterday I moved Vasile’s family into a 1 room apartment în the town. They had to move out from the home of extended family member where they staying more than 2 weeks. So we decided to rent for them a one bedroom apartment while we can move ön with the Containers. You can see pictures with me (Otto) with them.
Today we celebrated Maria’s birthday, in their new temporary home with pizza and in the evening, with the youth Group we prepared a surprise for her where they gave her a birthday cake and sang to her. I think that this was her first ever birthday cake until now”

Ahh – we are so happy they are finally safe and now we just need permission for a piece of land to put these containers on. This land must be connected to the sewage system and have electricity so please pray for a breakthrough as its a stale mate situation with the town hall at the moment. Massive thanks to everyone.
This has been a very humbling experience for everyone and we were able to act quickly in this instance.

We do have a fund called Club Link that can send money instantly to help in these emergency situations. For £5 a month we can give families like this a lifeline and importantly give them hope.