We arrived in Bulgaria to the remnants of snow and proper winter cold before travelling up through hills clad with whitened forests and bordered by mountains on each horizon, followed by a flat expanse of farmland regularly dotted with cruising or perched buzzards and massive tractor dealerships. However, the contrast between the beauty of the country and life for some of its residents soon became apparent as we drove into an area known as a major centre for human trafficking. We went to visit villages that our project managers have relationships with and are trying to help people so that there is less temptation to look abroad for jobs – which in many cases don’t exist but by that time it is too late.

We headed into a neighbourhood with narrow, deeply potholed streets, wandering dogs, walls roughly patched with whatever came to hand, and clearly no building controls. A man was breaking up a wood partition in the street with a large axe, while behind him stood an old horse and cart ready to remove the pieces. Nobody's behaviour indicated that this was anything unusual. 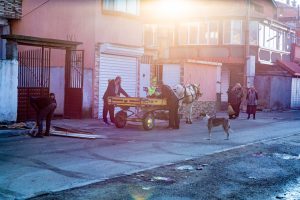 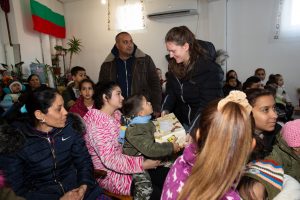 We were giving shoeboxes to two groups in this community, the first of which were packed into a small room used as a church, with just a few decorations to indicate its purpose. The crowd of mainly children accompanied by mothers or grandmothers excitedly waited for their gifts and in the main opened them straight away, sometimes showing us their favourite items.

As we came out, the kids clustered around our photographer, throwing exuberant shapes and showing     themselves to be children no different to those back home despite their poverty.

The second group was also in a church, nondescript from the outside, but clearly purpose-converted inside with an overhead balcony included. But here the similarity to churches known to us ended, with exposed, unfinished concrete steps up to the higher level, big holes in the walls of the entrance lobby, bare light bulbs and a sheet of polystyrene serving as a notice board. Yet this room was full of noisy anticipation, the children cheering every time a box of presents was brought in. The volume only went up as the shoeboxes full of presents were handed out, with donated football scarves being a favourite, and one lady crying as she received a hot water bottle.

However, this time many did not open their boxes, something our local project leader said demonstrated the prevalence of crime and dog-eat-dog nature of life in such a deprived area. Nevertheless the occasion and experience was one of great joy and it was good to be a part of bringing that to them.

Day 2
Another cold, crystaline day with whispering mist over the fields and clouds of starlings viewed through a roadside parade of delicately frosted trees. As the sky cleared we saw landscapes both beautifully wild from sweeping hilly vistas to the slow, long-winged flight of a crane overhead, but tough to inhabit, witnessed by horse-drawn carts carrying cut branches for firewood, people working a field by hand, frequent ruined houses and long abandoned petrol stations. 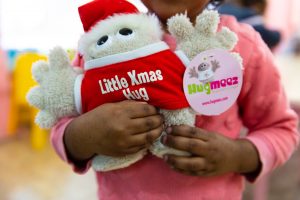 Amongst all this we visited a school, a kindergarten, a special needs childrens centre and an orphanage. They were very strict on the taking of photos so we have avoided showing photos of the childrens faces. At the first there was a contrasting mix of times and cultures, with stern Bulgarian leaders facing hand-drawn Teenage Mutant Ninja Turtles across the room and unguarded metal stoves heating classrooms where girls wore t-shirts featuring Elsa from Frozen. Here bright-eyed, well behaved kids all received shoeboxes and compared favourite items, particularly toothpaste and brushes, more football scarves and a small plastic robot.

Moving to the kindergarten, a carpetful of children almost effervescent with excitement waved and 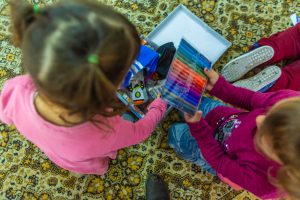 smiled through the doors at us, and once released, rushed the table with the shoeboxes on like a small, brightly-coloured tidal wave. Happy mayhem ensued with pink gloves, plasticine, chocolate Christmas puddings and note books being waved at us before it was time to clear up and leave.

However as we drove away, there was a reminder of the reason for our work here, for the rearmost section of the kindergarten was unusable, being in complete dis-repair with windows broken or entirely missing. A local pastor who organised our visit later

told us that in the schools most were very poor with 90% not having any gifts at Christmas, and teachers themselves bringing in materials and clothes to enable theirs pupils to attend. The shoeboxes were so prized because the cost of them could often be equal in value to an entire months child benefit.

The special needs centre next on our list was run to a very high level with clearly happy children, and as a result its manager had been tasked with bringing similar standards to the nearby orphanage. Having negotiated the rough streets between the two, deserted and edged with care-worn houses, we met a 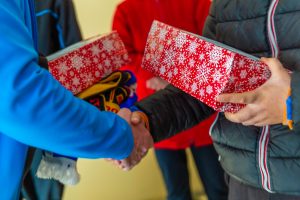 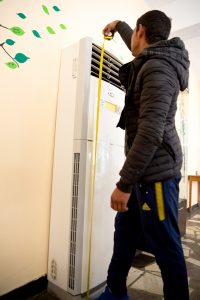 mixture of young people ranging from under ten to nearly adult, and from native Bulgarian to Iranian refugees. We weren't sure how our boxes for families would work here, but all were opened and explored, nervous silences broken, and items compared and displayed. One lad, training to be a builder, was so impressed with his tape measure that he immediately set about taking the dimensions of the rooms heating units, while another, on seeing the football scarves, defied the language barrier to ask if we had any for Chelsea!

Hopefully over time the situations of these young people will be improved by the new director of this home in meaningful and long-lasting ways, but all those we met today have significant challenges in their lives, challenges which they seemed to be managing better than many of us might, and it was wonderful to see their resilience and give them small gifts that their current support isn't able to provide.

Day 3
Today we had two new groups of people to meet and taking photos was ok. First we travelled to a primary school in where the older boys unloaded all the boxes themselves with an endearing mix of helpfulness, male bravado and actually impressive stamina.

We then gave out the shoebox presents in the playground and watched them opened in joyfully chaotic scenes up and down the school steps and on nearby terraced areas before being invited in to meet the director. He wanted to thank us for our visit and collect information so he could write an article about Link to Hope and our time there in the school paper.

In return we asked about his schools and if any of his children had difficulty attending. He said some did, in particular ten pupils, cared for by one grandmother in the village, who was amazingly also responsible for another fourteen non-school age youngsters! Later we visited her. It is a small house and many of the children sleep on the floor. One set of parents had left the country to find work, one had simply moved away and the other couple had learning difficulties but were at least still there to support. We went to visit her. She found a beautiful scarf and gloves in her box and fortunately at the school her grandchildren received some more shoeboxes with sweets and toys in.

This and another village we visited were in the south of the country, reached through the beautiful Rhodope mountains, their ridges interlaced with banks of gently translucent mist, and then along the banks of a wide but quite empty river, over which drifted pure white egrets, contrasting starkly with the frequent broken remains of past industries.

The mayor of the second village, part-way into the hills, met us in a public square-like area where he had gathered some of the community's more elderly people. In these places the old can feel abandoned and forgotten as the young move away to find work, leaving only them and a dying settlement.
In addition some of these, for a variety of reasons, had never in their life received a present. Many were given today as they clustered chatting and joking around our van, and one man in particular was moved to tears by his gift.

We then walked further into the village to visit in their homes some who were unable to come out to us. This was very special as we were able to meet and fully acknowledge them as individuals. The first house we went to was a lady who scrambled to get up to greet us and Pastor Hari gave her a pink hot water bottle as well as her shoebox which made her very happy.

The next house we went to we learned that their names were Josef and Cilica, 86 and 89 respectively, and Gressimire, 67. All lived in homes which would be uninhabitable by our standards, heated only by small wood-burning stoves and no means of retaining that heat other than to remain in the stove room, which all of them did.

Josef said he never expected to receive such a gift, even when he eventually went to heaven. Lovely hot water bottle with a blue knitted cover was very popular.

While Gressimire, having bashfully put on new earrings was overjoyed with her also new scarf. She declared that she'd wear it to the market and everyone would be jealous. Despite their very obvious poverty people opened boxes of precious chocolates and offered hospitality to us. We could not refuse. This said so much about the situation of these people, and also a lot about their attitude to possessions - quite humbling and a real challenge to us.